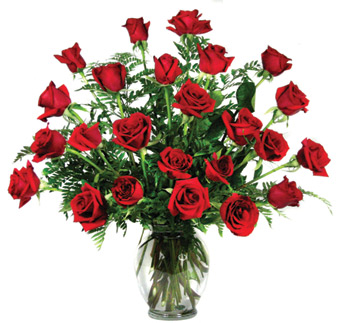 Here at MyFlorist, we love to celebrate every time of flower.  We know there are people out there who love daisies, begonias, sunflowers…every flower has its fans.  But the rose is, perhaps, the most loved of all flowers.  That’s why we’re thrilled to bring back Rose-Mania, one of our most popular flower sales!  You won’t find a better deal on two dozen medium length roses.  You can go with two dozen traditional red roses for your spouse, pick up gorgeous white roses for your mom, or send your best friend twenty-four yellow roses.  But don’t let tradition stop you—mix it up and create multicolored bouquets!

To help celebrate the rose, we’ve gathered a number of rose facts, trivia, and history tidbits.  We hope these little buds of rose information make you love this flower as much as we do.

Roses have been around for centuries.  In fact, it’s believed that the first roses were cultivated in China over 5,000 years ago!  The rose was grown around the world, but it was especially popular in the Middle East during the time of the Roman Empire.  The Roman nobles built huge rose gardens in southern Rome and used the flower for perfumes, decoration, and even for some medicinal purposes.  However, these gardens and even the rose’s popularity declined after the empire fell.

Later, the rose became popular in many European countries.  In the fifteenth century, two English factions, York and Lancaster, each used a rose as their symbol.  The battle between the two is now known as the War of the Roses.

In the seventeenth century, roses were so popular that royalty treated them as currency!  Roses and rose water was legal tender in many places.

In the United States, the oldest fossilized imprint of a rose was found in Florissant, Colorado, and it’s estimated to be 35 million years old!  That certainly means that the rose is native to the U.S. and wasn’t introduced during the European exploration of the continent.

Trivia about the rose:

The rose is also used by several states as its state flower: Iowa, Georgia, New York, North Dakota, and the District of Columbia.

According to one myth, the beautiful Rhodanthe had many suitors, so many that even the gods became jealous.  When Rhodanthe hid from them in Diana’s temple, the suitors broke down the doors.  Diana, already jealous, became angry and transformed the maiden and the men into a single flower, the rose.  Rhodanthe became the bud and the men became the thorns.

In the fourteenth century, Robert Knollys built a passage between two homes he owned on opposite sides of Seething Lane.  However, he did not get permission from the Lord Mayer of London to do this.  His punishment: he was to pay a tax of one red rose on a cushion for all eternity.  Even today, the Lord Mayer is presented with a red rose on June 24th as payment!

There is a rose bush on the wall of the Hildesheim Cathedral in Germany that is believed to be the world’s oldest living rose and is said to be over 1,000 years old.

Want to see some of our many Rose-Mania arrangements?  Check out our Washington DC Rose Specials on our Flickr page!

If you’re looking for the best roses on sale DC metro based shop, see what we have to offer!

Remember, Rose-Mania won’t be around forever!  Don’t miss out on these savings.

The Language of Flowers

Sometimes finding the exact words for a situation is difficult.  Sure, things like “Happy Birthday!” or “Congratulations on your baby boy!” are easy enough, but it can be difficult to put some of your feelings out there.  On Valentine’s Day, for example, you may not be sure if you’re ready to take the plunge and say those three little words, but you might have been thinking about it.  How can you put your feelings out there if you’re not sure if the words are right?

One way to state your feelings without speaking is to let flowers speak for you.  We often do this on anniversaries, birthdays, and Valentine’s Day.  On Valentine’s Day, for example, we give our significant others red roses to signify love.  In fact, any time red roses are given, they are almost always whispering “I love you.”  You don’t need to speak the words when presenting a single red rose or a bouquet of a dozen.

But flowers can say more than just love.  You can let flowers speak for you in many occasions.  You can tell your friends, relatives, and co-workers how proud you are of them by sending a huge congratulations bouquet.  Flowers can express your joy at a new baby or your sorrow at the loss of a friend or relative.  Flowers have a huge vocabulary and can say just about anything!

What flowers say what, though?  This can be difficult.  You probably wouldn’t want to use red roses to tell a co-worker “thanks for helping me on that project.”  They might hear the wrong thing.  A mixed arrangement featuring daises or brightly colored flowers, however, may be exactly what you want.  If you’re in doubt, ask your florist.  He or she knows a lot about the secret language of flowers and can help translate exactly what they will say to the recipient.

Of course, you don’t always have to let flowers do the talking alone.  Back them up with a small gift or two, plus a card always helps reinforce what the flowers are saying.  Speaking up and adding your voice to the flowers’ is also a great idea, especially if you really want to make it clear what you’re feeling. 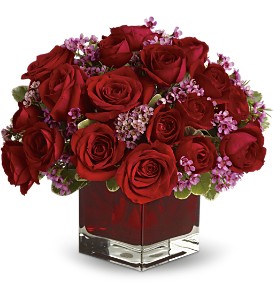 Roses are red, violets are blue….  This traditional rhyme can end many different ways, but it’s one of the sayings about flowers that everyone knows.  The rose is a flower with one of the highest profiles.  Nearly everyone can identify it and knows that it usually stands for love.  The rose is grown as a decorative flower all around the world and has been popular for centuries.

The first known civilizations to cultivate the rose were China, Persia, and several Mediterranean countries.  Records show that these cultures grew roses as far back as 500 BC.  In addition to growing roses, they started creating hybrids, leading to the many different colored roses we have today.

Roses were the favorite flower of Empress Josephine of France.  She had huge rose gardens planted at her home in Malmaison, and it’s still possible to visit these gardens today.  Another famous rose garden built during the 19th century was at Abney Park Cemetery in England.  Over a thousand different species and varieties can be found there!

But roses have appeared in more places than just in the gardens.  Perfume makers have long been obsessed with that perfect smell you get from a rose, and many rose-scented perfumes have been made over the years.  These perfumes are made from rose oil, which is created by steam distilling crushed rose petals.  The method of creating rose oil was discovered in Persia and soon spread throughout the world.

The rose is also the subject of many works of art.  Several famous artists, including Monet, Renoir, and Cezanne, have painted the rose.

These are just a few little bits of trivia about the Rose, one of the most popular flowers.  Of course, it has long been a symbol of romantic love, so next time you want to tell your significant other how much you care, send some roses.  Then wow your partner with a few of these facts!

It’s easy to choose flowers for any occasion or recipient.   We’ll give you a few simple tips.

Let’s start with the happy occasions.  Anniversaries, romantic expressions, birthdays, new babies, thank yous and just sharing your deepest emotions are good opportunities to reach out and celebrate!  Flower arrangments with these flowers alone or in combination and are perfect:

For more solemn occasions, such as the sad parting of a loved one, the same flowers will work, but in different types of arrangements and in soft colors like yellow, red, pink, and pastels.

To choose flowers for your recipient, we suggest these easy guidelines:

Keep in mind what you know about the recipient, the colors they enjoy, and their personalities, whether more playful or more serious.

5)  Getting roses at the office gives us something for show and tell.

6)  Getting roses to celebrate a happy event just makes us happier.

7)  Everyone should get roses at least once in a lifetime.

8)  Roses can be simple or lavish.

9)  Roses speak for us and help us share our feelings.  Roses, more than any other flower, help express our most important, special sentiments.

10) Roses can get you out of the dog house faster than words.

And Check Out Our 5 Day Special on Two Dozen Roses – Just $99!
For our local DC Metro delivery areas only.

As the US government pushes the record-making $700 billion bail-out for the banking sector, and a $25 billion loan to carmakers, our confidence as consumers takes a tumble. We, as a nation, are cutting back, learning to live on a cash basis. Fuel and food prices are going up and we hear “economic depression” on the news and around the water cooler. So in this economy, who can afford luxuries like flowers? If we put aside certain events like weddings and funerals and Mother’s Day where flowers are often necessary to express our feelings, what else warrants such decadent spending? Let’s do a Top 10 list of Why Flowers Are Always Affordable:

Balance your checkbook. Pay your bills. Check your investments. And then send
some flowers.

Call Us. We Love to Help.